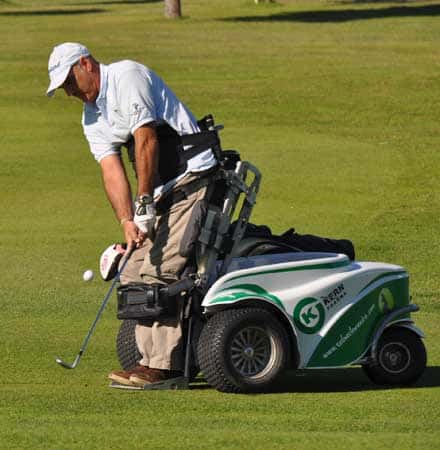 In the words of Javier de Arvizu, “Both Cleveland Golf / Srixon and myself, at a personal level, are delighted to have Sebas Lorente in our team. His sporting success and his leading role in promoting adapted golf, both in Spain and worldwide, are aspects that make Cleveland Golf / Srixon proud to participate in them through Sebas.”

Among the most prominent international successes of Sebas Lorente are the 2010 Wheelchair European Golf Championship, and the runner-up of the European Adapted Golf Championships (Nations Cup) in 2011, as part of the Spanish national team. His most recent win was in the 2013 Austrian Wheelchair Trophy.

Sebastian Lorente is currently preparing the first golf tournament to be held in Europe exclusively for wheelchair players, called the European Challenge for Wheelchair Golfers, to be held on 8th and 9th of April at the Club de Golf Terramar, Sitges (Barcelona).

In Sebas Lorente’s golf bag we find a diverse mix of Cleveland Golf clubs and flexes: the driver with Senior flex, Regular flex for the wedges, and the others with Lady flex (although the length of the shafts are male standards). These choices of flex help launch the ball as high as possible with the long shots, which is what most players of adapted golf struggle with.