11 Abril 2014 – Mark Gibson is the overall winner of the European Challenge for Wheelchair Golfers held at Club de Golf Terramar in Sitges (Barcelona, Spain), showing an overwhelming superiority and taking the double prize by winning both categories, Scratch and Handicap .

At the event, the English player delivered the best partial results of 12-18, for a total of 30 points, six ahead of the French player Jean Marie Requeut, Scratch runner-up with 24. The Irish Tony Brouder and the Dutch Monique Kalkman tied for the third place with 19 points, and the fifth place went to the only Spanish representative, Sebastian Lorente, promotor of the tournament, who finished with 17 points.

Mark Gibson was also placed at the top of the leaderboard in the Handicap category with an aggregate of 65 points (30-35), more than two points over Tony Brouder and Monique Kalkman, both second tied with 63 points. Sebastian Lorente was fourth with 56 points. 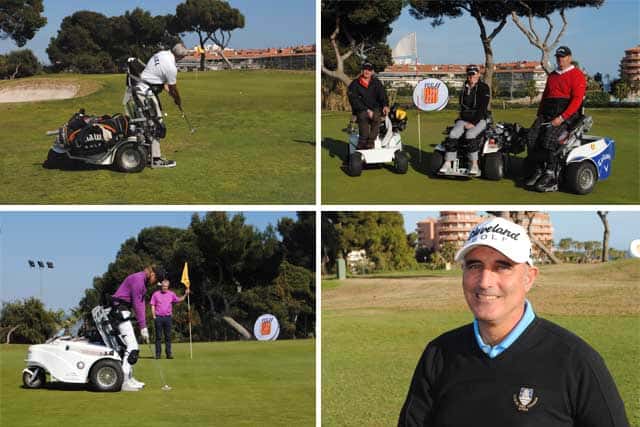 Sebastian Lorente said: “The evaluation of the  tournament has been spectacular by all participants. They gave an 11 over 10. They leave Sitges delighted, trusting that we can organize it again next year. To have the opportunity to compete amongst wheelchair players alone is a step forward in this modality of adapted golf.”

“They loved the Terramar course. Yesterday was a little long and today was a bit more comfortabe, although with demanding flags in both rounds. There has been a bit of wind, but we’ve had a pleasant and very sunny day. As for my performance, the truth is that I played terribly today, although the result doesn’t look that bad.”

“I will need some time to thank all those who have given us their help and support, starting with the members and staff of Terramar who have made a tremendous effort, and all the companies and institutions that have been involved in this initiative. To all, thank you.”