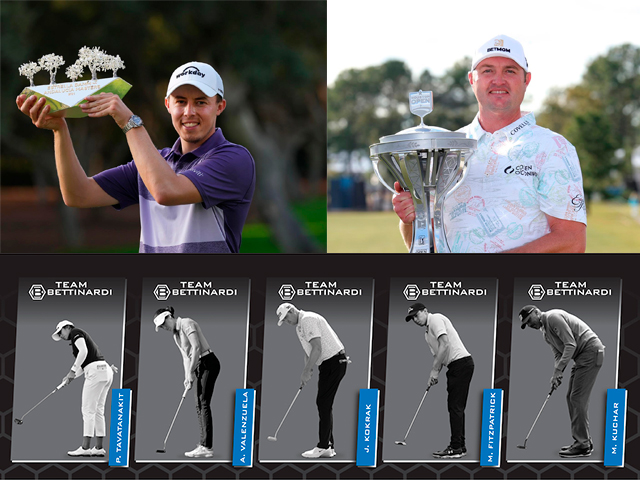 January 3, 2022 – Bettinardi Golf, makers of the world’s finest milled putters, and the inventor of the one-piece milling technology is proud to announce the re-signing of five Bettinardi Tour Staffers: Jason Kokrak, Matthew Fitzpatrick, Matt Kuchar, Patty Tavatanakit, and Albane Valenzuela to multi-year contracts ahead of the 2022 season.

2021 was another record-breaking year for Bettinardi Golf’s core staffers, earning 5 Professional Tour Victories, 12 Top-5’s, and 28 Top-20 finishes across all major tours, and over 12 million dollars in prize money.

Coming off of his best season on the PGA Tour, Jason Kokrak led the Bettinardi Tour Dept. with four victories dating back to November of 2020, winning The CJ Cup, Charles Schwab Challenge, Houston Open, and QBE Shootout in a span of 29 starts. Since making the switch to his Studio Stock 38, Kokrak now ranks 6th on Tour in Strokes Gained Putting after being ranked 151st at the start of last season, and is currently 20th in the Official World Golf Ranking, the highest ranking of his career.

After signing with Bettinardi Golf in 2020, Matthew Fitzpatrick continued his longstanding success on both the PGA and European Tour’s, winning the 2021 Estrella Damm N.A. Andalucia Masters, while posting four Top-5 finishes across both Tour’s. Fitzpatrick also competed for Team Europe in the 2021 Ryder Cup at Whistling Straits.

Patty Tavatankit put together one of the most successful rookie seasons in LPGA Tour history, winning the ANA Inspiration to become Bettinardi Golf’s first LPGA Major Champion. Along with the major victory, Patty added six Top-5 finishes, and was named the Louise Suggs Rookie of the Year, and ROLEX Annika Major Award Winner.

“We are thrilled to have our core brand ambassadors back and representing Bettinardi Golf in 2022 and beyond,” said Executive Vice President of Bettinardi Golf, Sam Bettinardi. “All five of these players have helped contribute 14 victories to our companies’ total of 95 wins since 1998, and we look to continue adding the finest players representing us around the globe.”