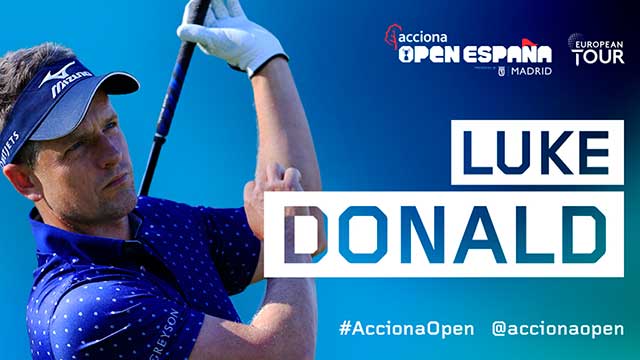 September 27, 2021 – Englishman Luke Donald, an ex-world number one, will be among the players contesting the Acciona Open de España presented by Madrid, which takes place at the Club de Campo Villa de Madrid between 7 and 10 October, where Jon Rahm has also confirmed his presence. The Basque player currently sits at the top of the world rankings, a position occupied by Donald a decade ago.

His CV is adorned by four wins with the European Ryder Cup team, the World Cup in 2004 with Paul Casey, five PGA Tour wins, six on the European Tour and two on the Japan Golf Tour. Last weekend, Luke Donald was a vice captain for Europe at the Ryder Cup at Whistling Straits (Wisconsin).

Luke Donald and his surprising relationship with Madrid

Coincidentally, the Briton has a special relationship with Madrid; his stunning rise to the pinnacle of world golf, which culminated in 2011, began in the Spanish capital twelve months earlier, when Donald’s classy performance won him the Madrid Masters 2010.

The win led to a radical transformation in his career, ending a four-year title drought to climb into the top 10 (9) and setting himself up for a place in Europe’s Ryder Cup team that would go on to defeat the USA at the Celtic Manor.

Despite the fact that he led the 2010 Madrid Masters from the first round, victory did not come easily and he needed an eagle on the 16th at Real Sociedad Hípica Española Club de Campo to seal the deal.

“The win in Madrid opened a lot of doors for me, it boosted my confidence and was very satisfying as it showed me that my hard work was finally delivering results. My road to the world number one started in Madrid. From there, things started to go very well, partly because of my change in attitude, I’ve been much more responsible since I had my daughter”, he said just before the  Madrid Masters 2011.

Madrid and world number ones

In 2011, it had been 18 years since fans in Madrid were able to see a world number one in action in their city. The last time they had the chance came in 1993, when another Englishman, Nick Faldo, came to the Spanish capital to play in the Open de España at the RACE while at the top of the world ranking. Now, a decade later, Jon Rahm takes the baton as the best player on the planet, offering the fans the opportunity and privilege of seeing his spectacular game up close.