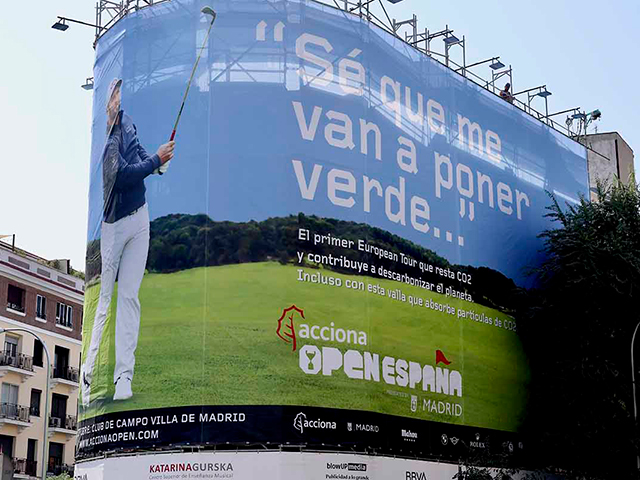 July 22, 2021 – ACCIONA, a world leader in providing regeneration solutions for a carbon-free economy, has been named the title sponsor of the ACCIONA Open de España at Villa de Madrid Country Club from October 7-10, 2021.

The title partnership reaffirms ACCIONA’s commitment and support for golf in Spain by joining one of the oldest and most prestigious tournaments in the world.

Defending champion and 2021 U.S. Open winner Jon Rahm is set to tee it up at Villa de Madrid Country Club for the first time as a Major champion when the event returns to the schedule after it was cancelled last year due to the Covid-19 pandemic.

The two-time winner of the event will go down in the record books alongside past winners of the Open de España including fellow Major champions Arnold Palmer, Seve Ballesteros, Sergio García, Bernhard Langer and Sir Nick Faldo.

Tournament promoter Madrid Trophy Promotion S.L. and ACCIONA have a long-standing relationship with the consultancy firm playing a key role in the processes adopted as part of the sustainability criteria in order to obtain international certification under ISO 20121.

The certification calls for the implementation of sustainability measures during all stages of event planning, taking into account their environmental, social and economic impact, in line with the Sustainable Development Goals (SDG) set out in the company’s Sustainability Master Plan for 2025.

The ACCIONA Open de España is the first event organised by Madrid Trophy Promotion S.L. since obtaining ISO 20121 certification and this seal, granted by SGS (Société Générale de Surveillance), accredits the company’s undertaking to uphold sustainability, with particular emphasis on combating climate change. A commitment that will take the form of applying measures for the tournament to have a positive environmental and social impact from this year’s edition onwards.

The European Tour has made a strengthened commitment to sustainability this year through the launch of the Green Drive initiative with a vision to become a showcase for social and environmental responsibility, delivering net positive impacts around the world.

The Green Drive, supported by the GEO Foundation for sustainable golf, underlines an intensified approach towards priority issues such as climate change; biodiversity loss; air and ocean pollution; and sustainable and ethical procurement. The European Tour’s approach was launched on World Environment Day in June as part of Golf For Good, the Tour’s overarching Community Social Responsibility (CSR) programme.

Gerard Tsobanian, Chairman and CEO of the ACCIONA Spanish Open, said: “For some time now we have been immersed in a major process of change to become the benchmark when it comes to organising carbon-neutral sporting events. ACCIONA, a leading firm in the management of sustainable solutions, is the best possible partner for us as we embark on this journey at the Villa de Madrid Country Club in October.”

Joaquín Mollinedo, ACCIONA’s Institutional Relations, Communication and Branding Director, added: “This is an exciting project, because not only can we now count on such a great partner as Madrid Trophy Promotion and support a top-flight golf competition, it will also enable us to apply every possible solution to the event so that the activities generated by the tournament have a positive impact on the local environment.”

Ben Cowen, the European Tour’s Deputy Chief Operating Officer, said: “We are delighted to welcome ACCIONA into our sponsor family for the first time. With their focus on sustainability, they are an excellent fit for us following our own strengthened commitment in this area as part of our Golf For Good programme.

“We are looking forward to working together with ACCIONA, Madrid Trophy Promotion and the Spanish Golf Federation for the successful return of the Open de España to our schedule after last year’s postponement.”

The Spanish Open attracted 31,219 visitors to the Villa de Madrid Country Club for the 2019 edition, which ended superbly as Rahm romped home with a five-shot margin over the second-placed player, Rafael Cabrera Bello, and a final result of 22 below par.