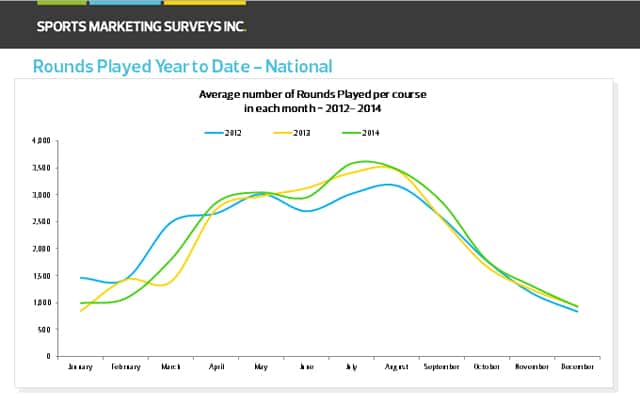 With temperatures above average for the duration of Q4, and no major sporting events plying for the UK golfers attention, the number of golf rounds played in the final (three) months of 2014 were up 4.5% vis-à-vis the same period in 2013. This resulted in a year-on-year growth of 3.5%.

The fourth quarter began as Q3 had ended, with all regions retaining positive golfing numbers, with the exception of Scotland. This diminution was eliminated in November when the same region boasted greatly increased statistics, as did all other regions in England and Wales.

The end of year pressures, coupled with the varied and often wet weather generated a mixed month in December, in terms of the amount of golf being played.

At the end of the third quarter, the amount of golf played in the UK exhibited encouraging progression versus 2013. This positive growth continued in the fourth quarter, and resulted in year-end numbers which were up on 2013 (3.5%) and 2012 (1.4%) respectively.

Richard Payne, Senior Manager of Sports Accounts at SMS Inc. commented: “After announcing the positive Q3 numbers (5.3% up vs Q3 2013), we knew that unless the weather turned dramatically in Q4, that we would be able to publicise some positive news to the UK golf industry. Hopefully this intelligence gives golf a boost going into the 2015 season.”