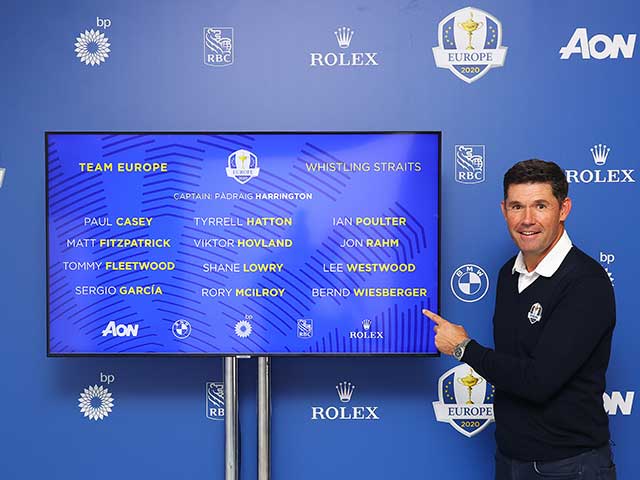 Garcia and Poulter have been central to Europe’s recent success in the biennial contest, with a combined total of 15 previous Ryder Cup appearances between them, collectively contributing an impressive 40½ points to the European cause. Meanwhile, Lowry, the 2019 Open Champion, will be making his Ryder Cup debut, joining Hovland and Wiesberger as the three rookies in Team Europe.

“I’m really happy with my team,” said Padraig Harrington. “It’s a great team for foursomes and fourball play, a lot of good ball-strikers and it’s a team going to Whistling Straits that is well-suited to the golf course. It’s a strong, well rounded, and very balanced team.”

Spaniard Garcia will be hoping to extend his record as Europe’s all-time leading points scorer when he makes his tenth Ryder Cup appearance. The 2017 Masters Champion made his Ryder Cup debut in 1999 and, aside from 2010, has been a constant presence in the blue of Europe.

“It feels amazing,” said Sergio Garcia. “Obviously it’s been a good year and I think a lot of solid play on my part. Unfortunately I fell a little short of making it by myself but I’m so happy to have the confidence of the vice captains, of Captain Harrington, and I can’t wait to see the guys and just get going.” 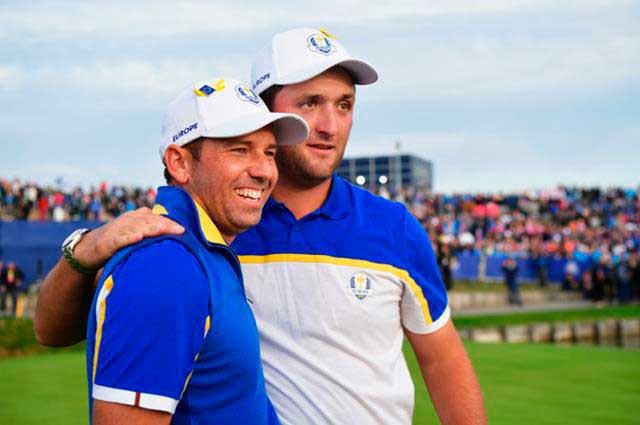 Like Garcia, Englishman Ian Poulter also boasts a formidable Ryder Cup record. Poulter will make his seventh Ryder Cup record appearance at Whistling Straits and he is undefeated in the Singles, having contributed 15 points overall. He was part of the European Teams which triumphed on American soil in 2004 at Oakland Hills and Medinah in 2012.

“To be standing here with the trophy in front of me to know we’re going to go again is amazing,” said Ian Poulter. “Seven Ryder Cups is stuff that you can only dream of. It’s incredible. This trophy has meant a lot to me through the years.

“For Paddy to call me today and say I want you as part of my team, it’s emotional. It’s a stacked team. I’m excited. I’m proud. My chest has been getting work the last few weeks, trying to do as many press-ups as I possibly can and hole as many putts as I possibly can to bring as many points as I can to this team.”

Irishman Shane Lowry just missed out on automatic qualification at the BMW PGA Championship and will make his first appearance for Team Europe. He previously represented his continent in the 2016 EurAsia Cup, and in addition to the Claret Jug he won two years ago at Royal Portrush, his five European Tour wins include the 2015 WGC-Bridgestone Invitational in America, as well as a Rolex Series event, the Abu Dhabi HSBC Championship.

“For me it’s been a career-long goal to get to the Ryder Cup,” said Shane Lowry. “I remember sitting in the media centre here at Wentworth after I won The Open when the points started for this Ryder Cup team and I said, that’s my number one goal and it has been now for the last two years.

“There’s no point going over just to make up numbers. We want to go over and win and I have that in my head. I’ve said that all year, I don’t want to be there just to say I’ve played the Ryder Cup. I want to go and I want to make it count.”

Harrington’s European Team travel to Whistling Straits aiming to retain the Ryder Cup which they reclaimed at Le Golf National in 2018 by a margin of 17½-10½.